TV Coverage of March on Washington vs Gran Marcha Shows Difference Between Being Black vs Brown in U.S. 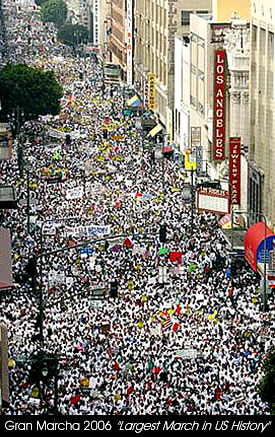 WASHINGTON D.C. - To commemorate the 50th Anniversary of the world famous "March on Washington", it was either a few thousand or tens of thousands of people that converged on the Lincoln Memorial last year. It's hard to know which of the two estimates is accurate since both were reported. In either case, it's very gratifying to see the 50th Anniversary of the March on Washington receive so much national media attention. The late great Dr. Rev. Martin Luther King, Jr. happens to be one of the most respected individuals in all of U.S. history to myself and many others. This shouldn't be a surprise since we all know the story of this great man so well. Yet, the reason for our commonly held high regard of Dr. King can be attributed to factors more than merely the delivery of his great "I Have A Dream" speech given at his March on Washington of 1963. Although many do cite this pivitol moment of American history as one of the main reasons he has continued to inspire countless individuals over the last fifty years. Dr. Rev. Martin Luther King, Jr. is universally loved and respected for another very important reason that is seldom mentioned at all. He had an opportunity to be seen. That is, he was given national media 'exposure' for his dream. This is an envious scenario that leadership in the U.S. Latino community still longs for today.

If one is to ask the average American: "What is the largest march in U.S. history?" A good majority would likely reply that it's either the original March on Washington of 1963 (which drew 240,000 participants), or the so-called "Million Man March" of 1995, with this later event being notorious for the rhetoric of Louis Farrakhan and an ensuing debate between organizers and the U.S. National Park Service (which estimated attendance at 400,000 people). While both of these marches were large and significant with regards to U.S. civil rights and ethnic relations, both of these answers would be wrong. The correct answer is "La Gran Marcha" which occurred on March 25, 2006 in the streets of downtown L.A. Initially a "low" crowd estimate for La Gran Marcha was given at 500,000 participants by an ill-prepared on the spot L.A.P.D. spokesperson. Later this count was revised to the more accurate estimate of between 1 to 1.25 million people through photographic analysis. So then, why do so few Americans know about La Gran Marcha (which was equally important to the history of this country) in comparison to these other two mentioned marches? Especially since, La Gran Marcha is highly significant to the current issues and mood of our times? As one of the many organizers of this historic event, this is a question that's continued to trouble me since the passing of this important day. Hear this. It is with an unapologetic non-silence that I'll unequivocally state. It's the perceived difference in treatment between being black vs brown in the U.S.A. today.

Beyond the fact that La Gran Marcha was the largest march in U.S. history and remarkably received very little to virtually no national radio and TV news coverage from all of the major American networks (other than Spanish language media). Whereas, the original March on Washington and yesterday's 50th anniversary event both had live full continuous media coverage throughout. Beyond the fact that our current president is an African-American male, the richest U.S. woman is a black female, and all forms of pop culture have hundreds (if not thousands) of black celebrities who reap the benefits of great wealth and influence by being today's role models. Many in the American public continue to claim that blacks still have neither prestige, opportunity, power or respect. Whereas I, and many others of the Latino community, especially we who are of Mexican decent, often feel to be the most hated people in this the most powerful nation on earth. Even so, I'm hopeful. I'm hopefull that Dr. King's dream still resonates to have a direct impact on the further integration and empowerment of Latinos in the U.S., as it has already for blacks. This despite that again, no Latinos were shown at yesterday's event. Paz