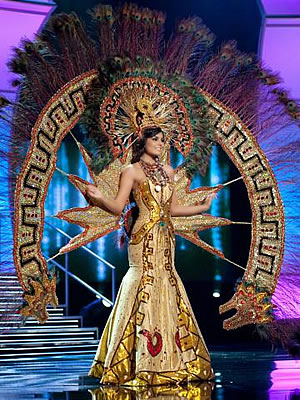 continued from Page One

Asked by Olympic gold-medal figure skater Evan Lysacek how she felt about unsupervised Internet use, Navarrete said the Internet is important.

"I do believe that Internet is an indispensable, necessary tool for the present time," she said through an interpreter. "We must be sure to teach them the values we learned as a family."

Navarrete won a package of prizes including an undisclosed salary, a luxury New York apartment with living expenses, a one-year scholarship to the New York Film Academy with housing after her reign, plus jewelry, clothes and shoes fit for a beauty champion. Campbell won the Miss Congeniality Universe award. Miss Thailand Fonthip Watcharatrakul won Miss Photogenic Universe and a second award for having the best national costume. First runner-up was Miss Jamaica Yendi Phillipps, while second runner-up was Miss Australia Jesinta Campbell. Fakih, a 24-year-old Lebanese immigrant from Dearborn, MI, spurred celebrations among Arab-Americans when she won Miss USA. Pageant records aren't detailed enough to show if Fakih is the first Arab-American, Muslim or immigrant to win Miss USA. Miss USA has not been named Miss Universe since Brook Lee won the title in 1997.